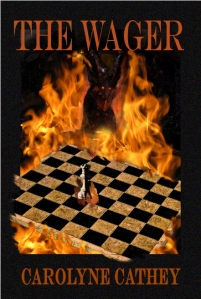 THE WAGER is now in paperback!

Like many people, I enjoy holding a real book in my hands, but I plan on getting a kindle, too, and giving that a try. I can see the benefit of both.

How much will Lord Kyle jeopardize to honor his lust-driven wager with the peasant Eleanor? His Life?

Eleanor, a peasant, escaped the nuns at the convent who punished her as a witch because of her prophetic dreams. And yet when Lord Kyle of Trystonwood rescues her, she realizes he is the knight in her vision.

Lord Kyle interprets her prophecy to his advantage – that she belongs to him as his bedmate. When Eleanor refuses, Kyle proposes a rash and dangerous wager in a game of chess that tempts her to risk her innocence.

Lord Kyle knows peasants are forbidden to wed knights, especially when King Edward who cries treason at even minor slights has strongly suggested Kyle wed the king’s cousin. The king would not be amused.

But Kyle is arrogantly confident. A female peasant would never beat him at a game of chess.

As to Eleanor’s confessed visions, Kyle, too, dreams of a dragon. Is the dragon King Edward? Or Eleanor? Or is Eleanor truly a witch who has cast a deadly spell on him?

2 thoughts on “THE WAGER is now in PAPERBACK! In time for All Hallow’s Eve (Halloween).”